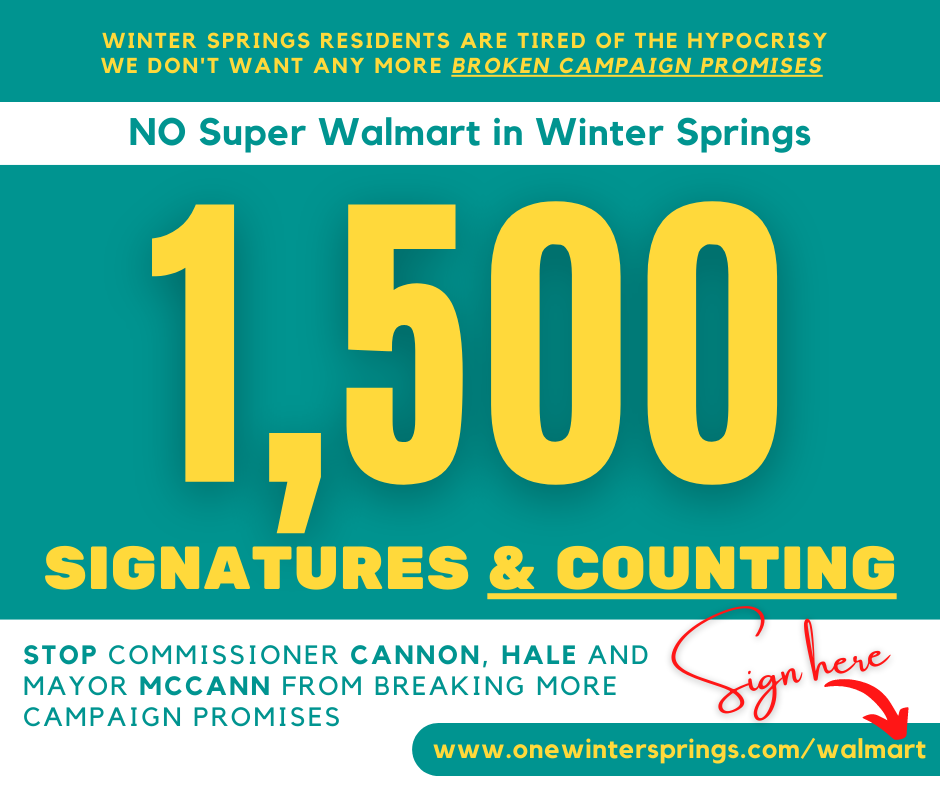 UPDATE: Candidates Mark Caruso, Victoria Colangelo and Cade Resnick have all stated they are opposed to the Super Walmart.

Association President Jesse Phillips made the following statement about the effort:

“The response to our petition is overwhelming. People are upset about the broken campaign promises of our commissioners and this outpouring of opposition against a Super Walmart shows the First Amendment is alive and well.”

How Did We Get Here?

Didn’t Commissioner Cannon, Hale and the others make campaign promises to STOP development in Winter Springs? Although Commissioner Cannon (elected 8 years ago in 2014) made campaign promises to stop development, here is a partial list of projects which have been passed while he has been in office since 2014, all of which a) he has voted to advance at some point or b) have passed through a commission whose votes he controls, giving him political cover while allowing the projects to continue:

HERE’S HOW THE GAME IS PLAYED: At times the City tries to placate public pressure, “voting down” certain procedural elements, while allowing projects to continue. The most recent example of this is when Commissioner Kevin Cannon made a BIG DEAL “disagreeing” with some aspects of the 132 units about to be added near Town Center, but then voted in favor of the motion to remove up to 1,000 trees, including some specimen trees, in order to allow the demolition project to move forward. We must educate ourselves as residents, since we are about to get a bunch of political mailers from these entrenched politicians touting how hard they “tried” to stop certain things from happen and trying to shift the blame for their own broken promises.