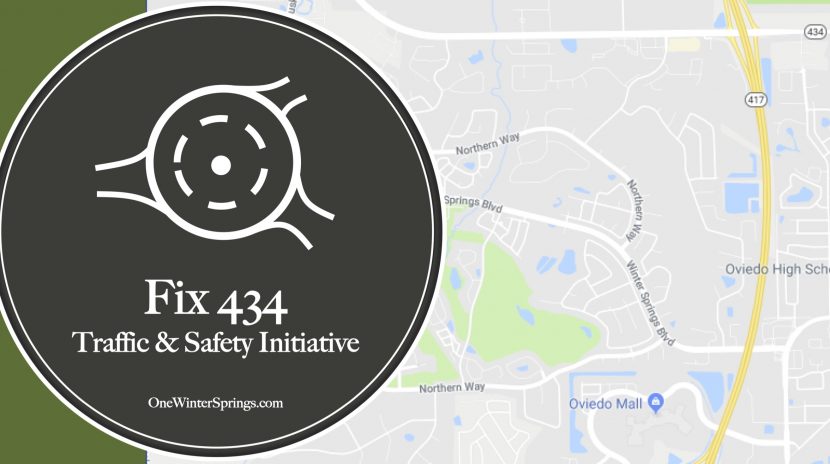 The Winter Springs Community Association (WSCA), a group formed earlier this year to promote residents, neighborhoods and businesses in Winter Springs, has announced a “Fix 434 Traffic Initiative” aimed at raising public support for a project which will enhance SR 434 between 417 and Oviedo.

The WSCA has released a website www.OneWinterSprings.com/Fix434 with information and background on an effort within the county to address the project, which was recently downgraded in priority by the federal government.

Association leaders lobbied county officials at a recent project workshop, delivering a letter encouraging commissioners to respond to the priority downgrade by lending the state money to get the project moving.

“…we request Seminole County provide initial funding for the project and conduct negotiations with the Florida Department of Transportation to ensure these funds are reimbursed by the State,” the letter stated.

In addition to the efforts to lobby the county, the WSCA is also hosting an upcoming discussion with Seminole County Commissioner Bob Dallari. The meeting is held September 17th, and residents are encouraged to become involved in a project that could “finally provide much needed traffic relief.”

“We recently conducted some extensive surveys of our neighbors,” said fmr. Commissioner Ken Greenberg, the president of the WSCA. “Issues pertaining to traffic and transportation are very important, and it’s time we stopped talking and actually got something done.”

Information provided at the county workshop shows a number of hurdles must be overcome, including land acquisition. Representatives for the project will be speaking to city councils of both Winter Springs and neighboring Oviedo. In its Facebook post, the WSCA promised to pursue an active leadership role to raise support among residents.

“I remember driving some of these roads and seeing cows on my way down to UCF,” said Jesse Phillips, WSCA Executive Vice President. “Our needs have changed, and if the County can improve Dodd Road between Dike and Howell Branch, then improving a main artery linking two cities should be a no-brainer.”

Residents looking to get involved in the project, or looking for more information are encouraged to send an email to team@onewintersprings.com .